How to Make a Perfect Turkey in a Nesco Roaster Oven

By arbpen | November 26, 2009 - 18:22 |October 12, 2021 Chicken and Poultry, Evening and Dinner, Holidays, Make Ahead, Methods, Thanksgiving, The Nesco
Turkey in a Nesco with Injection and Rub
How to Make a Perfect Turkey in a Nesco Roaster Oven
Jump to Recipe Jump to Video Print Recipe 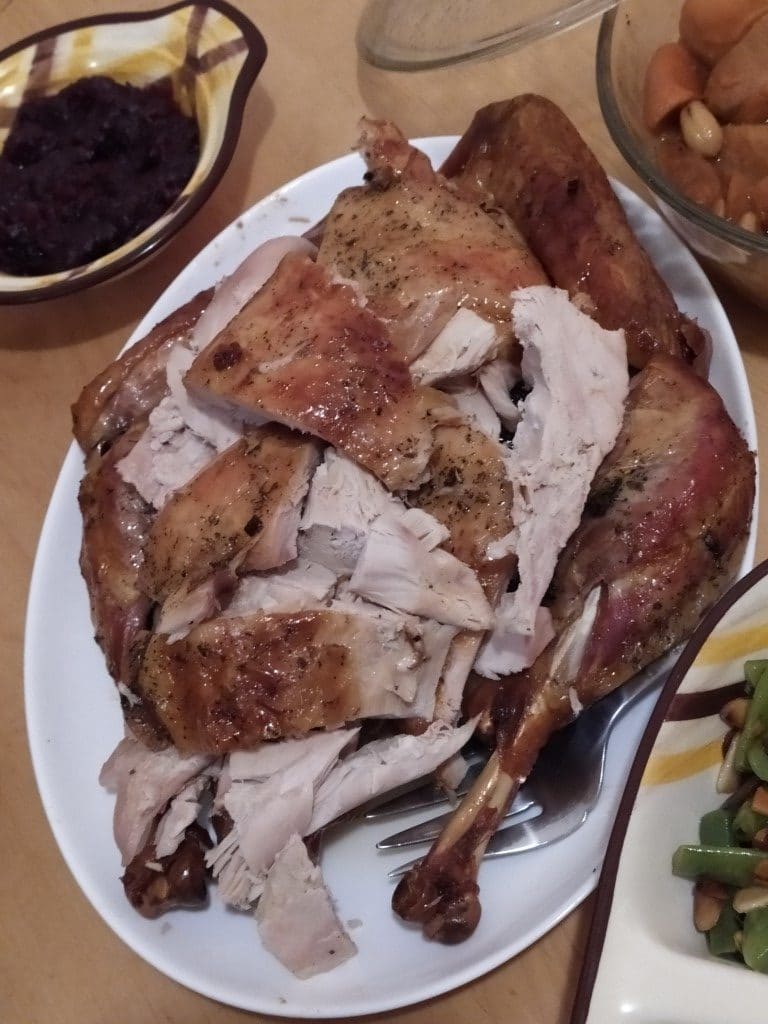 What Turkey is Supposed to Be

I didn’t go to my Grandmother’s for Thanksgiving. My mother and I usually cooked a Cornish hen and left it at that. When my mother died, I moved in with my Aunt Georgia, my Grandmother, and Grandfather. This is when I discovered a really good turkey, the way turkey was supposed to be. How to Roast a Perfect Turkey in a Nesco Electric Roaster
How to get your turkey's skin crisp but keep the meat moist in a Nesco roaster oven - with a timetable.

Every other time I had had turkey, it looked and tasted like my budgie’s cuttlebone. Seriously, I did not know why anyone would want to present something as nasty as that for a holiday all about giving thanks. What? You’re thankful that you don’t have to eat that?

I was curious at fifteen. I liked to cook, so I hung around with my grandmother while she made the feast. The first thing I noticed was this strange pink-colored oven thing that was in the middle of the kitchen. It had a little metal stand that it rested on. It also had a big red button and a dial to control the heat.

What came out of this marvelous contraption was a perfect turkey, the juiciest turkey I had ever had. This was something to be truthfully thankful for. Update: See the bottom of this post for a video about the wonderful 18-quart Nesco Oven.

Adventures in Finding a Nesco

For years, I searched in vain for a gadget like this – I finally stumbled upon one in an antique shop on Western Avenue, where they also had a few unrestored Wedgewood stoves. I was finally able to find out what it was called – a Nesco.

One day, watching QVC because nothing else was on, and there was no Internet at that time, I saw a four-quart Nesco and decided to order it. When it arrived I was so thrilled! It was too small to cook a turkey, but a nice chicken definitely fit. It also made a mean meatloaf.

The thing that I really loved about my Nesco was that I could use it in the summertime without heating up my kitchen. I could use it to keep foods warm, and I would put fried chicken in it to make sure that it was completely cooked. I loved my little Nesco, and when we moved and it got lost, I was crestfallen.

However, I have always felt that every cloud has a silver lining, so losing the small one meant I could get a large one like my grandmother had. I found a used eighteen-quart with the buffet service on eBay and bought it. Of course, you don’t have to go through what I did, you can go to Nesco and get one any time you want.

My “new” Nesco arrived just before Thanksgiving, just in time to roast the turkey. It was very flavorful, moist, and juicy, but, it did not have the nice crispy skin that my grandmother had had.

The next year, I tried a different approach. When I was nine years old, my mother asked me to put a roast of beef in the oven before she got home from work. I didn’t know any better, and I put the oven on to 450 degrees. After fifteen minutes or so, I could smell it and thought maybe the temperature was too high, so I lowered it to 300. It turned out perfect, moist, and juicy. Starting it at high heat had seared the meat, sealing in the juices. From then on, I did that with anything I roasted, including turkeys.

I could do that in the Nesco, too, but it would still not have the crispy skin, so I came up with a new plan. First I would brine the turkey, then inject it with seasonings, then I would put it in a regular pan and put it in a 450 oven for 15 minutes, and then transfer it to the Nesco.

Wow! What a bird that was! It was the perfect turkey that had the nicely browned, crispy skin from being in the oven, and was moist and juicy from being roasted in the Nesco. 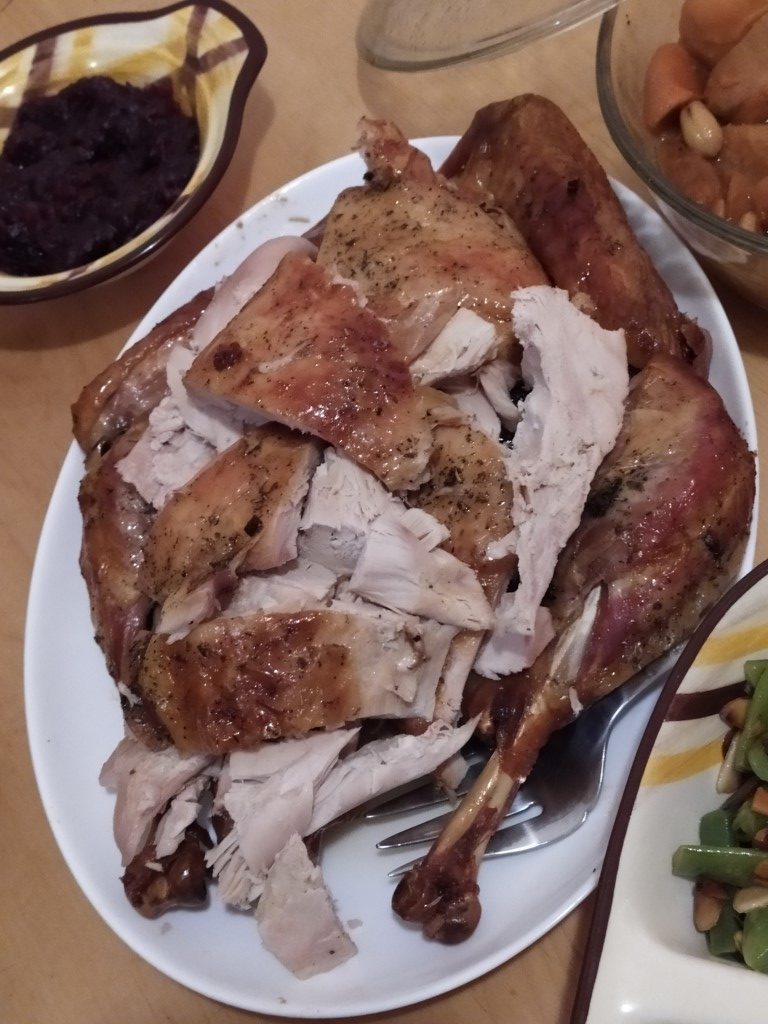 How to Make a Perfect Turkey in a Nesco Roaster Oven 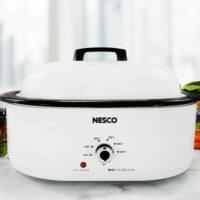 The risk of cross-contamination and poisoning is too great to put stuffing inside the bird's cavity. The stuffing used here gives the bird flavor, but it easily removed. 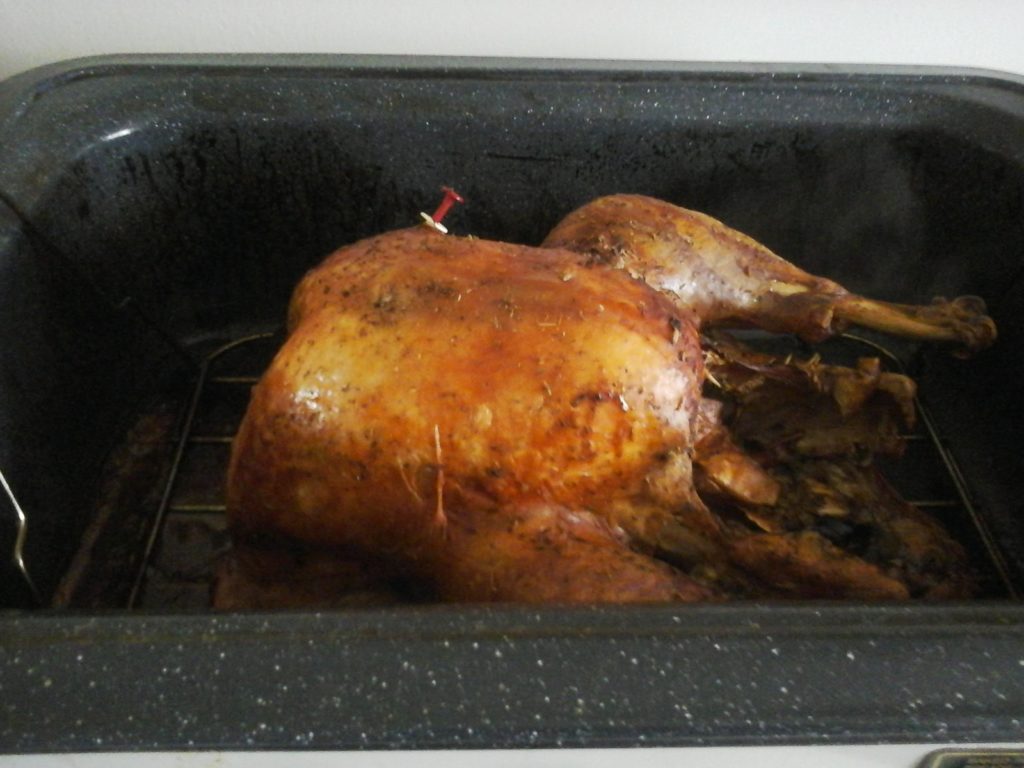