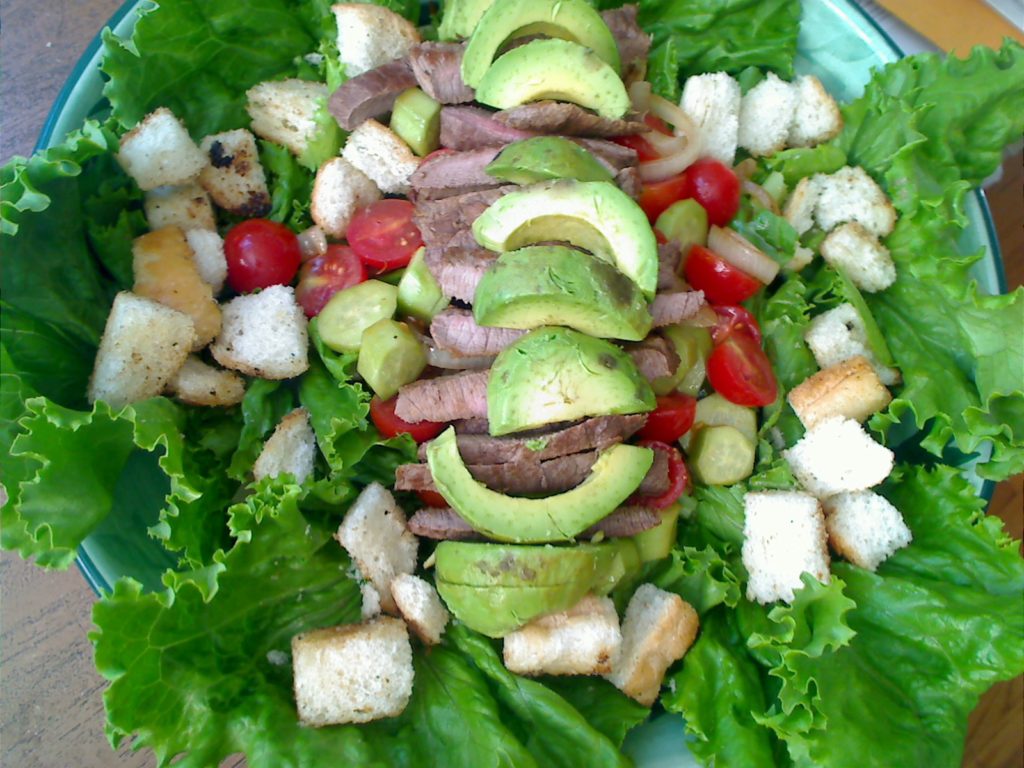 Hot Tin Roof Salad is a composed salad that has everything going for it, grilled marinated steak, grilled onions, Persian cucumbers, croutons, and fresh lettuce.  It’s a complete meal you can enjoy with friends and a bottle of white wine.

I loved the movie Cat on a Hot Tin Roof with Elizabeth Taylor, Paul Newman, and Burl Ives. It just seemed the weather was so hot and humid in that movie, kind of like it was today in Glendale, California. Spane, Amber’s children and a friend all had a wonderful time playing in the neighbor’s pool, and as I watched them, I thought that a steak salad would be the perfect end to a perfect day. I decided to call the salad Hot Tin Roof Salad because it was so hot and steamy here, just like in the movie.

With that being said, one of the wonderful things about summer is all the great, fresh vegetables. Tomatoes are sweet and pop juice into your mouth. Lettuce is really crisp and the greenest of green. The little Persian cucumbers I get at the local Armenian store are tender and flavorful – not like their large watery English cousins with the waxed skins that always seem to come upon you later. Buttery Haas avocados are also plentiful – did you know that all Haas avocados come from one single tree that died at the age of 76 in La Habra Heights, California?

So the first thing to do is was cut up the vegetables, except for the lettuce that comes at the very end. Halve the cherry tomatoes. Slice the Persian cucumbers. Then slice a half an onion, and sauté it in olive oil. Combine them with the tomatoes and cucumber and marinate them with the Vinaigrette Marinade. Slice the avocado but put it in a Tupperware until you are ready to assemble the salad. 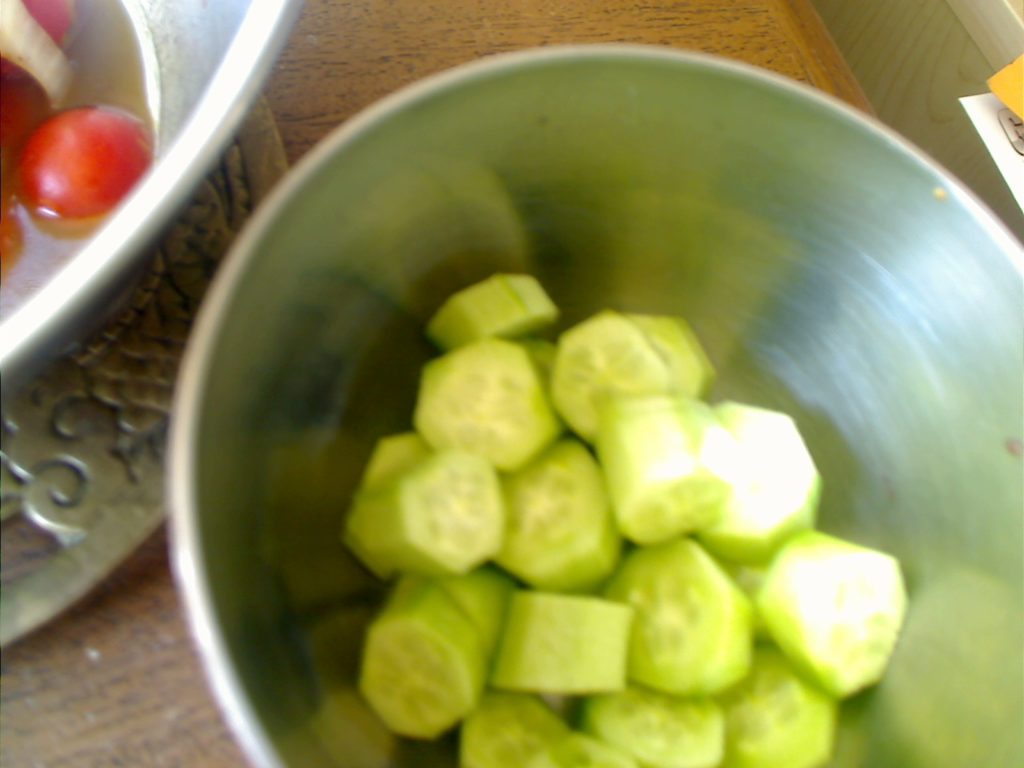 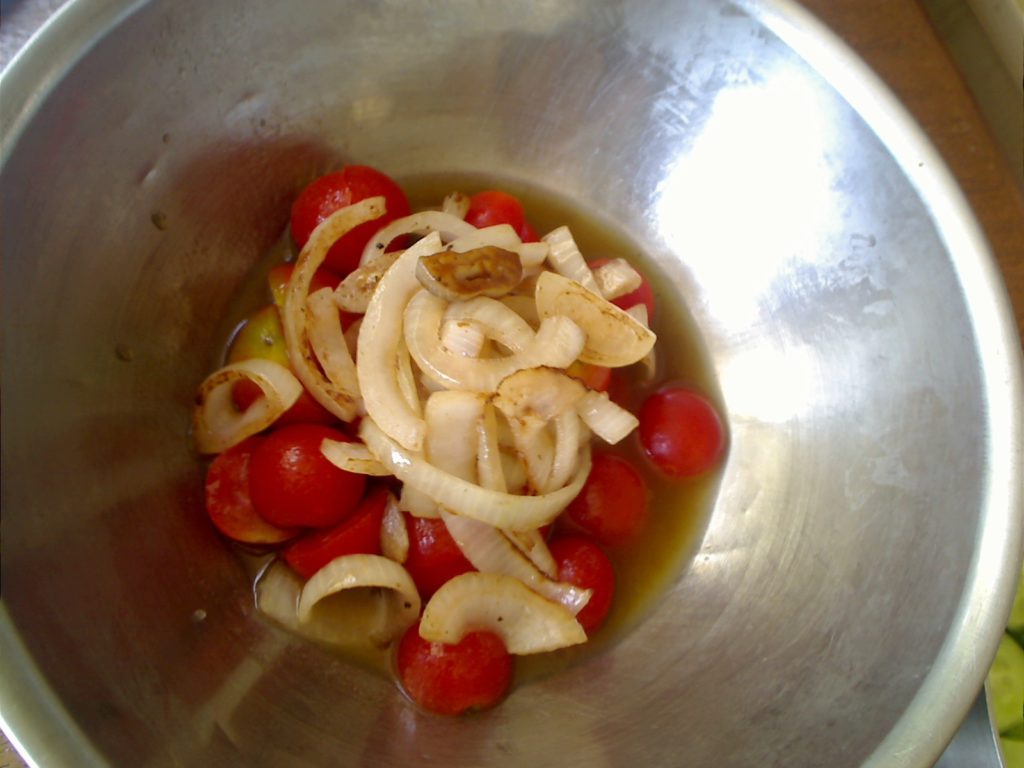 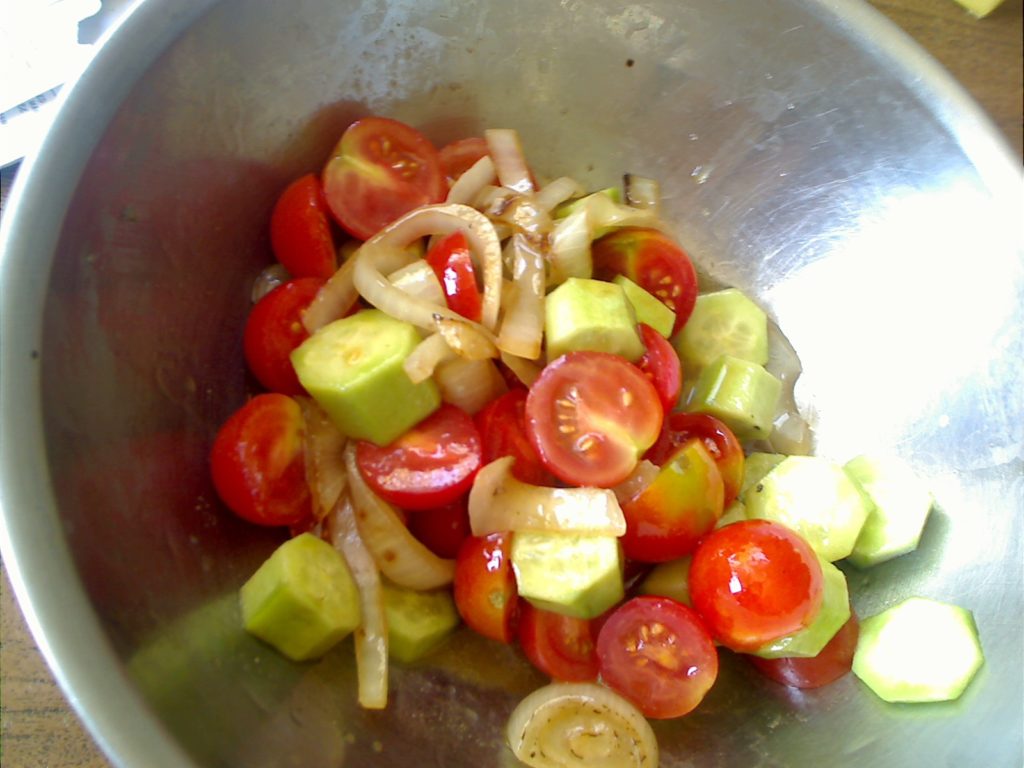 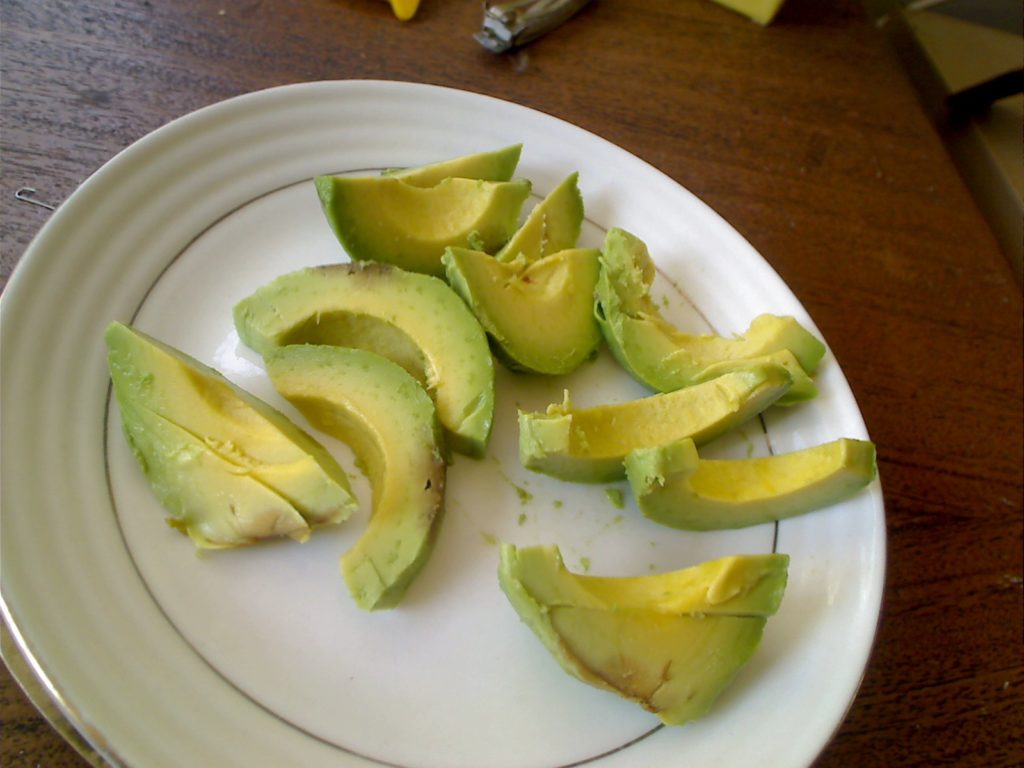 Grill two pieces of thinly sliced Top Round in the butter that has been flavored by the onions. Just before taking them off, put a little Worcestershire sauce. Let them rest a minute or so and slice them against the grain. 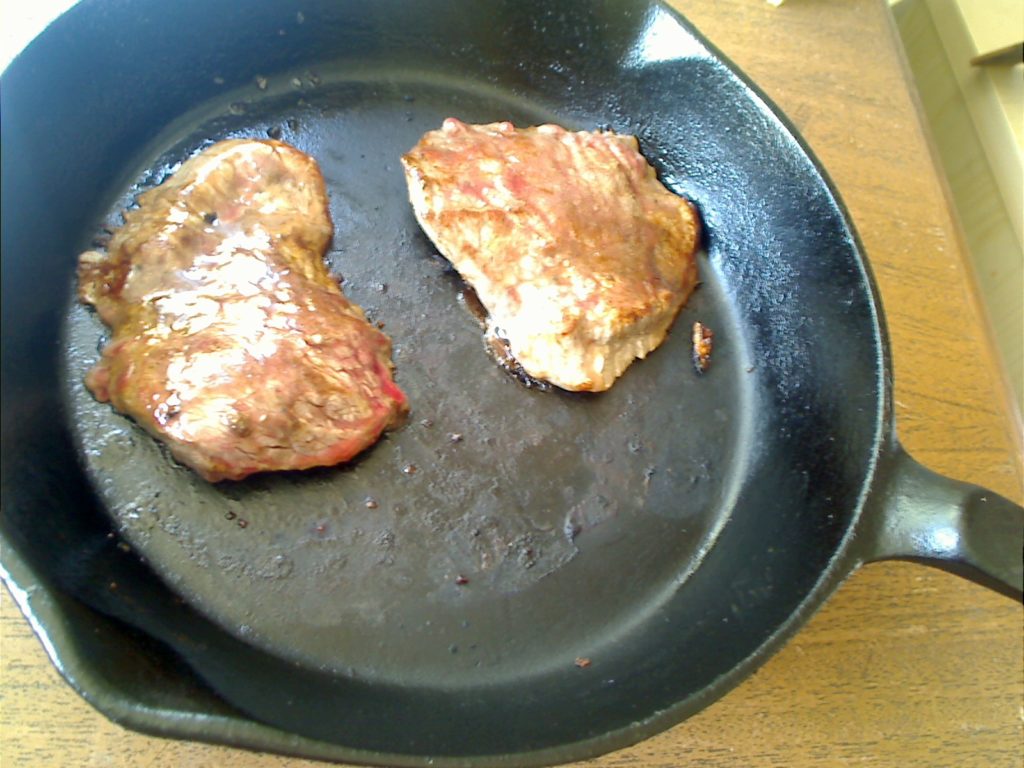 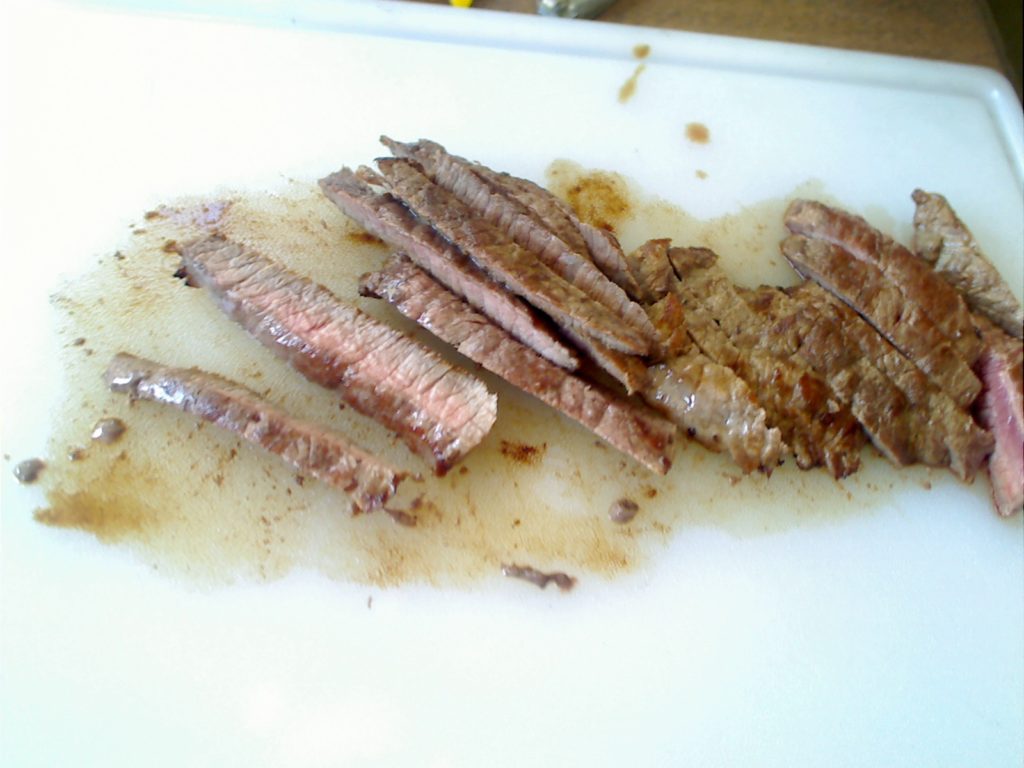 After the meat was done, I had a nicely flavored pan. I cut up some French rolls and sliced clove of garlic to make croûtons. I just added butter to the pan, and then cooked the bread until it was nicely coated. 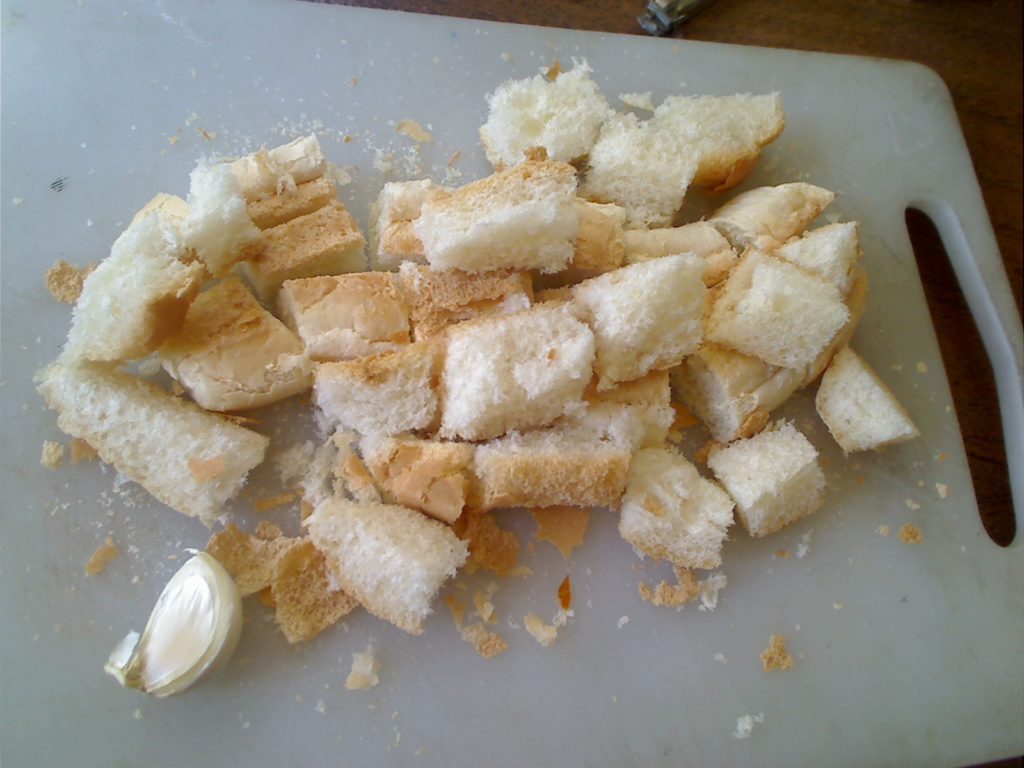 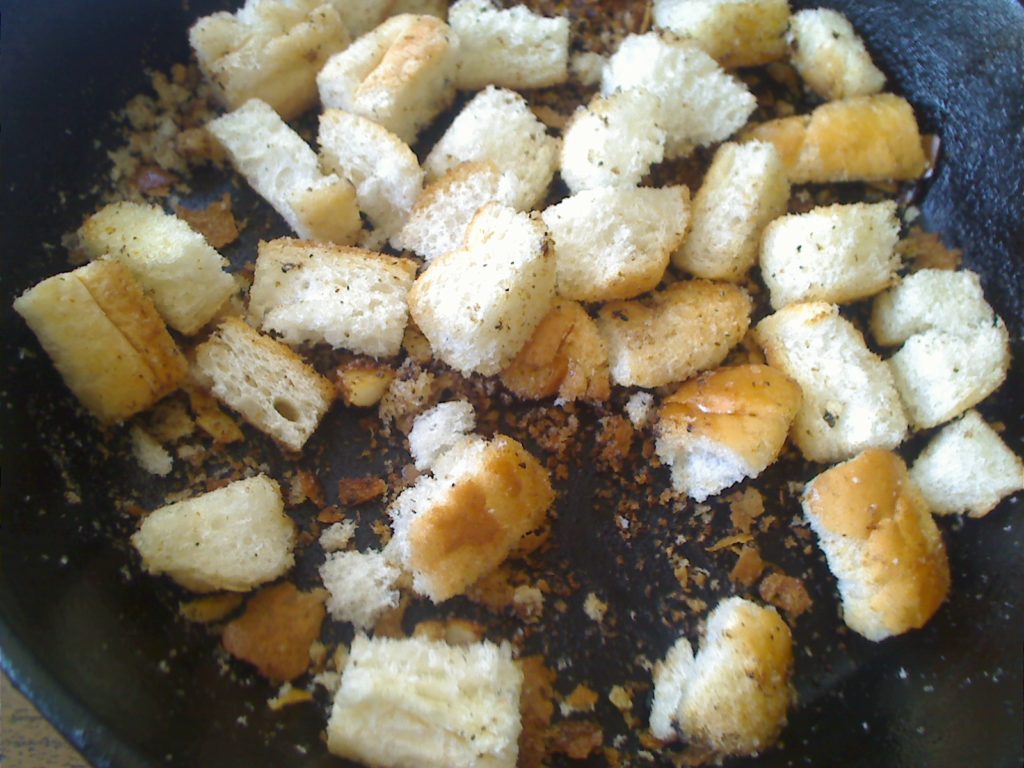 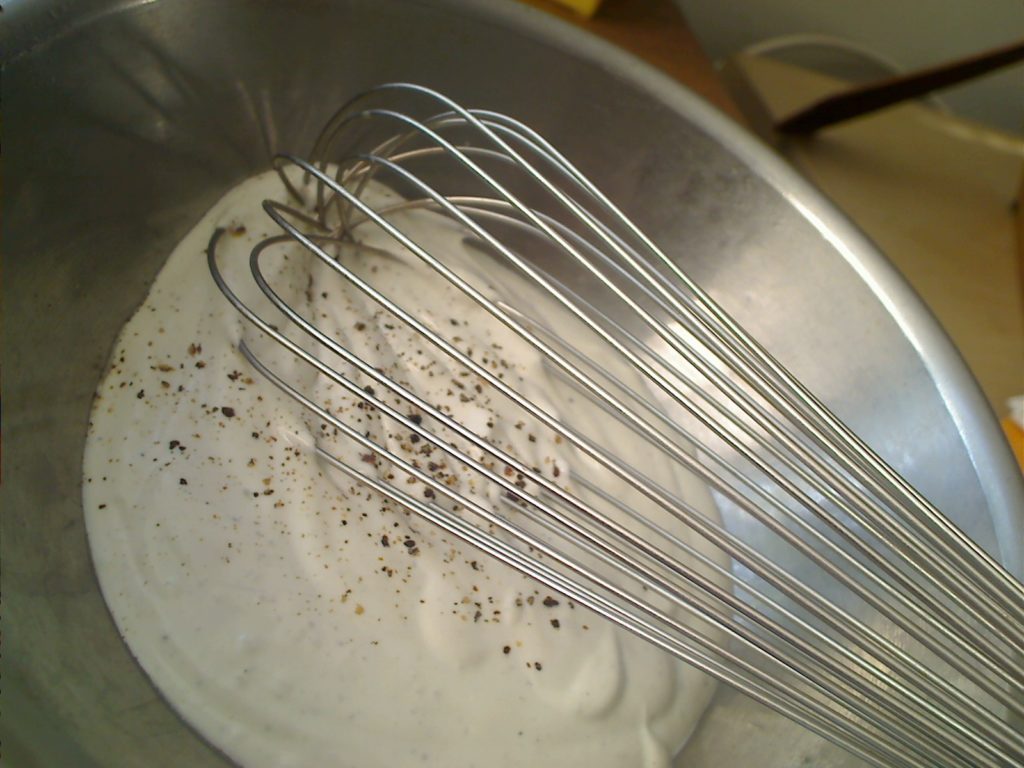 I have a large pasta serving bowl that I used because I had a lot of salad. Put large leaves on the bottom and up the sides then tare off smaller pieces.  Then put the croûtons in a circle on the outside, then fill that with the marinated tomato mixture. Pour the marinade over. Lay the steak slices over the tomato mixture then top that with the avocados that make the “roof”. 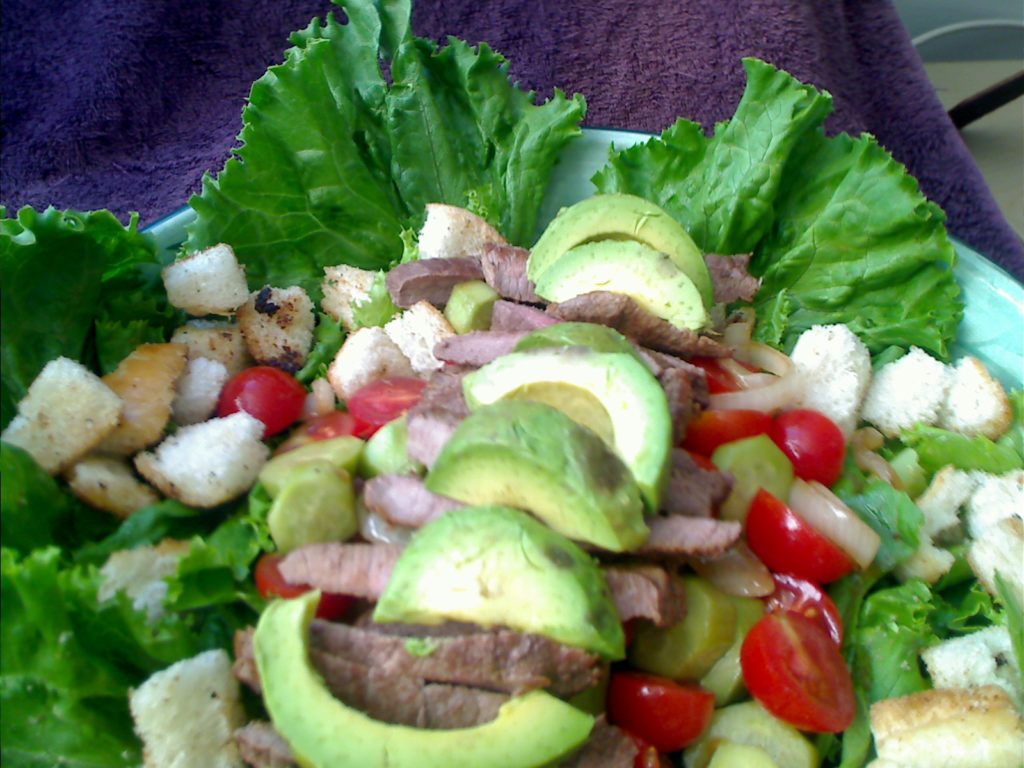 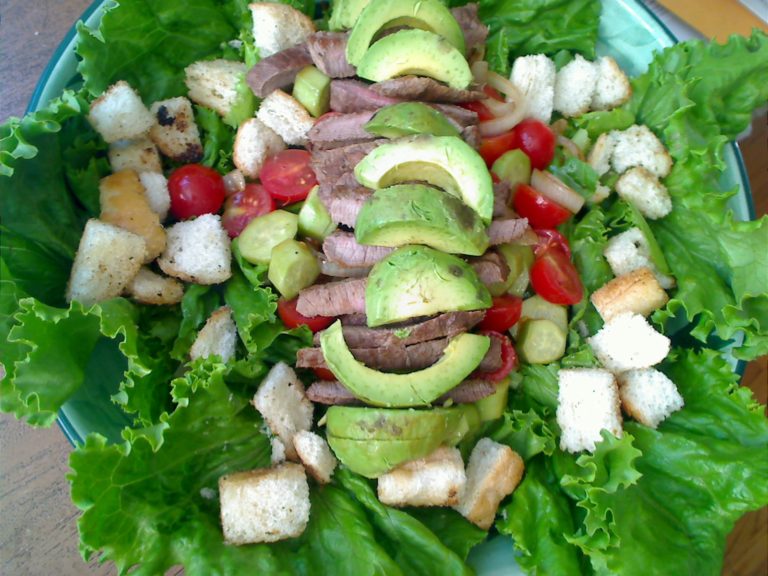 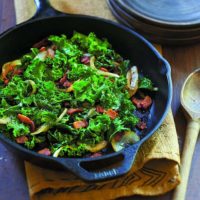 This is a great salad for the grill. All the vegetables, and of course, the steak, can go on the barbecue. Keep your kitchen cool in the summer! You can make this completely vegan by not including the steak, and using a vegan dressing.