Definition of SERENDIPITY:
the faculty or phenomenon of finding valuable or agreeable things not sought for; also : an instance of this
Merriam Webster

My friend, Amber, and I went to a local garage sale, and I only took five dollars with me, mostly because I did not really want anything.

I spied with my little eye, a shiny thing with black handles. I asked “How much for the waffle iron?”  The man said, “How much do you want to pay?”  Not wanting to sound eager, I said, “Well, how much to you want for it?”  and he said, “Oh, just give me $5.00 (Five Dollars) and take it away!”  I quickly handed him the $5.00 I had, knowing this was a steal!  When his mother came over and started extolling the waffle iron, and showing me that it had reversible plates (something I really wasn’t expecting), he was disappointed that he had already the $5.00 from me.  Later I looked on Ebay, and say that my toaster goes anywhere from $35.00 to $70.00.  Wow!  What a deal! 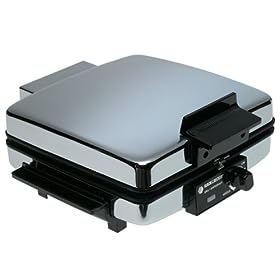 Update! If you are not as fortunate as I was, Black & Decker makes the G48TD Grill and Waffle Baker that looks almost like mine.

When we got back to Amber’s house, I borrowed her daughter, Noelle, to come with me to a cooking demonstration of Chicken Croquettes at Williams-Sonoma.  I felt I owed it to her for being so patient, we went to the Lego store and to “Play Land”. Even though I really love my son, it was really nice “renting” a little girl to take to the mall.

Sunday morning, I decided to make waffles in my new iron, and chicken wings that I had taken out of the freezer the night before.

To become a good cook requires more than the blind following of a recipe… To become a good cook means to gain a knowledge of foods and how they behave, and skill in manipulating them. The recipe by itself, helpful as it is, will not produce a good product; the human being using the recipe must interpret it and must have skill in handling the materials it prescribes.

Then I had to find a recipe for waffles.  When I want a good recipe, a tried and true recipe that is the ancestor of contemporary recipes, I look no further than my American Woman’s Cookbook Wartime Edition edited by Ruth Berolzheimer.  This is my most treasured cookbook, mine is 71 years old as of 2011. If you are so unlucky to not be able to find a copy at Amazon, then contact me, and I’ll be happy to point you to a PDF or Kindle version of the book.

Of course, right there on page 127 was just the recipe I was looking for, with clear directions.  I added vanilla and sugar to the batter that were not called for in the recipe.

The chicken part was easy, just fry them up. I fry the wing tips, too, because even though there is hardly any meat, there is some nice skin and cartilage to suck on.

A word about chicken wings. I almost never buy the “Party” wings, aka “Drumettes”, because the flat or wingette is more tender, and has better flavor. The pre-cut wings also don’t have wing tips. Don’t throw away your wing tips, don’t even save them for soup! They are just fine to suck the lovely juices they have been cooked in, or dipped in whatever sauce you may have prepared.  But, I digress …

I had not had waffles from a waffle iron since my father made them in Germany when I was six (yup, that’s a long, long time ago).  Amber came by with Noelle for moral support.  Once the machine was hot enough, I put some oil on the plates with a silicone brush, put the batter on, closed the lid, and waited with baited breath for the light to go out again indicating the waffle was finished.  It came out easily, and it was delicious!  I will be making more waffles, and using savory toppings.

Later, I made Buffalo sauce for the chicken wings. This is the recipe that Spane’s father, Douglas, have me.  He told me that when he was living Back East, he used to go to a certain bar in Buffalo where he got the recipe from the owner.  He says this is the original recipe, and I believe him.  With the hot wings, I made my mother’s recipe for Blue Cheese dressing – seriously the best.

And now for the recipes:

An old fashioned egg beater really does the job of whipping egg whites. In fact, it’s faster than a hand mixer, and doesn’t require lugging out the stand mixer. Plus, you get a little exercise!

Serve with melted butter and syrup, or with powdered sugar and fresh fruits in season.

Serve with milk which will cut the burning – beer, soda and water just spread it around.

4 Responses to Serendipity–Chicken and Waffles